I have been so impressed with the student’s innate ability to just DO anything I ask them to do involving technology.  In one class period they were able to begin their own students blogs embed videos in their posts and embed their very own Vokis.

Today I showed my students how Edmodo works to see if they might be interested in using it rather than the emailing we have been doing and they were super pumped and LOVING it!

But there was just one flop today…  I told them they had they whole period today to write in Spanish about ANY THING they wanted to write about in one post on their blogs.  I told them they could write about football, the oscars, Eminem, Ke$ha, baseball…anything and anything they wanted to write about.  They asked how long it had to be.  I said as long as you want so that I can tell you put effort into it and tried your best.  They asked how many pictures they had to have.  I said as many as you want or none at all.  This is your post.  I told them about hyperlinking the text if they wanted to (they already knew how) and we started a Google Doc so that if they did not know how to say something I wrote it on the Google Doc and they added it to their blogs.  I was so excited to read them later because their other posts where I had required them to do certain things “for a grade” were so great!  I thought for sure these would be great too because it is theirs, no limits, no requirements, just them writing about what they want to.

I was so disappointed in SOME of their posts, but others were FABULOUS.  One student actually wrote that he likes steak and followed up with saying that some day he will go to Mars and see aliens.  Another student wrote that he likes mangos because they are juicy.  Another student actually wrote in Spanish, “I am typing in Spanish” that was his post.  Another wrote, I am tired, I need to sleep.  Oh MY!  They seemed engaged in what they were doing.  They seemed as if they were on task working and that was what the produced in 40 minutes?  Oh boy.  I guess I need to give them requirements from now on!  So sad! I don’t want to give them expectations nor tell them what they will be graded on.  I just want them to produce.  Maybe I have high expectations, but I thought these posts would be GREAT, not a FLOP.  Sad face  😦

Here are some of the fabulous posts: 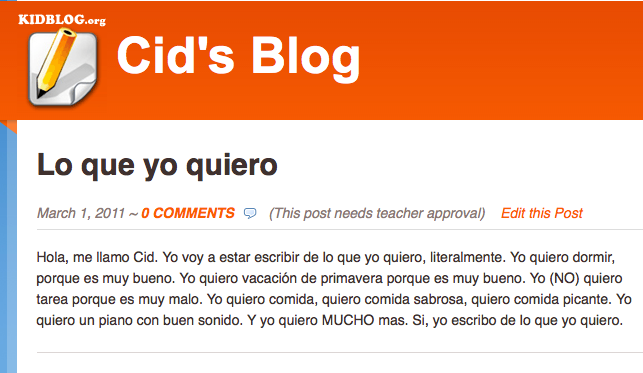 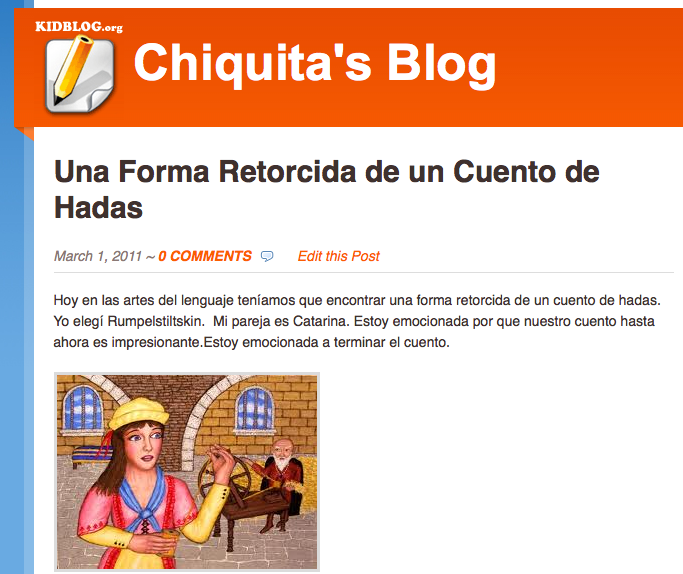 This particular students never disappoints me.  Her work is always fabulous.  Here is a link to her post because a screen shot won’t cover all that she accomplished!

All these posts, opinions, stories and reflections you find here are well-intentioned. I began this blog to share what was happening in my classroom with my students and now that I have my own blog through my school http://blogs.bannockburnschool.org/lbeversdorf ...I am truly I am just trying to share a snapshot of my mind at a certain point in time on a certain theme or topic, and maybe connect, share, collaborate or have a reader be able to empathize or feel what I was feeling or thinking. That's it.

So please feel free to agree or disagree, compliment or complain about any thing I write. That is what this blog is for. These are my opinions, stories and reflections and while I feel and think them right now they may change...that is what we humans do. We think, we reflect, we learn, we evolve.