I completed a graduate program in 2010.  It was a MA in Spanish.  Appropriate because I am a Spanish Teacher, right?  It was a travel study program through California State University Sacramento that took me to Costa Rica, Guatemala, Peru, Mexico and Spain.  It was a fantastic way to get my degree because I lived with families in each country, attended a university in each country and traveled around to experience the people, their traditions and culture. To finish the program and earn my degree, I was allowed to complete a project that I might be able to use in my classroom.  What a wonderful way to earn my degree!  The title of my project was All Children Speak the Same Language.  I chose that title because that is what I realized as I traveled from country to country.  I noticed that all children were the same everywhere!  EVERY WHERE!  No matter where you go, kids are kids.  They all speak the same language, just a universal language….that was all I knew.

My project was a video series that I made on a service trip to an orphanage in the Dominican Republic.  It was a video of the children there ranging in age from two to seventeen, talking about themselves, answering questions about their lives, playing and just being themselves.  I created a book to go along with it for teachers (ME) to use in my classroom, proving that all children are the same everywhere.  It was great because once I used it with my very affluent, privileged students here in the USA, my theory was proven.  My students has SO MUCH in common with these orphan children even though their lives are DRASTICALLY different.

A great friend of mine Bryson Adams was volunteering at an orphanage in Monte Cristi, Dominican Republic, so I thought I would visit him and complete my project there because it was a Spanish-speaking culture I had not yet experienced, and thankfully my awesome professor, Jorge A. Santana permitted me to do it. I loved my experience in the Dominican Republic so much that I continued these service trips following my friend Bryson to Nicaragua to help the organization called Outreach 360 the following summers.  Each summer I spent helping other people and children, the title of my project was proved day after day.  All children really do speak the same language.

Even with this graduate degree, project and travels behind me,  I wasn’t sure exactly what that language really was until yesterday during my kindergarten class.  I couldn’t put a name to it until yesterday.  Yesterday I was able to name it – love.  It is simply love.  That is the language that all children speak to one another….most times with out any real “words” whatsoever.

It is March and we just got a new kindergarten student in class.  He does not speak any English, only Russian.  Most of the teachers here at my school were a bit apprehensive hearing that this little five year old was going to join us more than half way through the school year, but we knew we would make it work. He’s been in our school now for about two weeks and as far I know…. so far so good!

He doesn’t speak any English, just Russian and I am attempting to help him learn Spanish!  Hmmmm…I wondered how it would go.  I have had several students who come the first day of kindergarten class only speaking Korean, Chinese, Polish or Russian, but not one that comes more than halfway through the school year!

Yesterday was his first day in my classroom.  What was so amazing was that although he speaks no English at all, he has clearly already made some sweet close friendships with a few different little boys that do not speak any Russian, just English.  He was sitting next to, and clinging to, another little English-speaking boy in my classroom.  From time to time he would say something to his little friend in Russian and the other little boy would just respond with a head nod or a smile or a hand hold or a pat on the back or a shhhh quiet finger in front of his lips or just some simple eye contact.  It was adorable to witness these two sweet boys who could not communicate in the same official language, just loved one another and had a connection that required no language nor words. It was just all about love and the energy between them.  There is another little girl in my classroom who speaks English and Russian, but she has already grown tired of being his translator.

As class went on, they continued to “communicate” with one another.  One in English and the other in Russian and me in Spanish.  So funny!  They sat in front of me on the big classroom rug almost sitting on top of one another, they were so close.  At one point as I am teaching and singing and talking about colors and numbers in Spanish, the American student begins to pick his nose (a regular occurrence in Kindergarten, yes).  The new little Russian guy did not like that one bit and was shaking his own finger at him and scolding him in Russian.  The American kiddo immediately stopped picking his nose and they both came back to singing with me in Spanish.  It was hilarious.  We then went on to do a numbers and colors sorting activity at our tables with a book we’d read in Spanish, Brown Bear, Brown Bear, What Do You See? by Eric Carle.  They each had a bag of M & M’s and had to sort their numbers and colors on a sorting mat with the animals from the book.  I wasn’t sure exactly how I was going to help my new student understand the activity, so I just did what his sweet new little American friend did…I smiled, nodded my head and showed him lots of love.  When he didn’t exactly understand what to do with the M&M’s, I just told him to EAT!  He understood that, but did not want to until the other kids did.

I work in such a wonderful place.  I get to teach these darling little human beings every day.  I get to learn from them maybe even more than they will ever learn from me.  I’ve been studying to become a yoga instructor over the past year of my life.  Much of the teaching of yoga is about love and no matter who we are or where we come from, we are all love.  We are all connected.  I realized that as adults we simply forget this simple language that children speak so easily.  We forget to speak this language because of all that we have been through, or the stories in our heads and thoughts about one another or the sometimes angry world that keep up from this very natural language that we are all born with.  We are really all born with this language.  It disappears or grows and goes in and out over time.  I am so fortunate to have had these two lovable kids in front of me to remind me.  If only we could all hold on to it and know that it is the one and only true thing between us all.  LOVE.

Below are some photos I’ve taken on my trips or in my classroom of me or these children speaking their common language.  They’ll help remind me of this love. 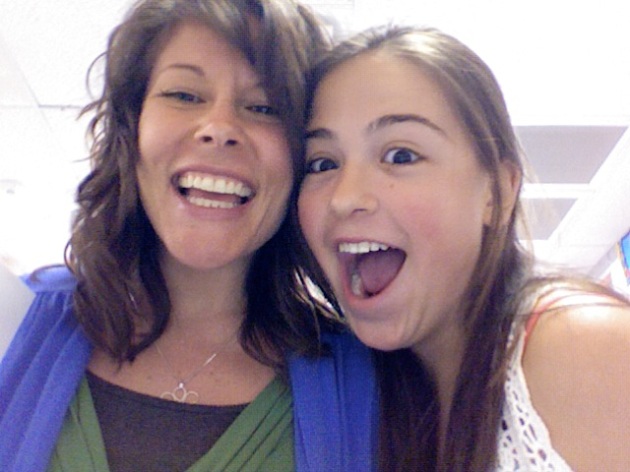 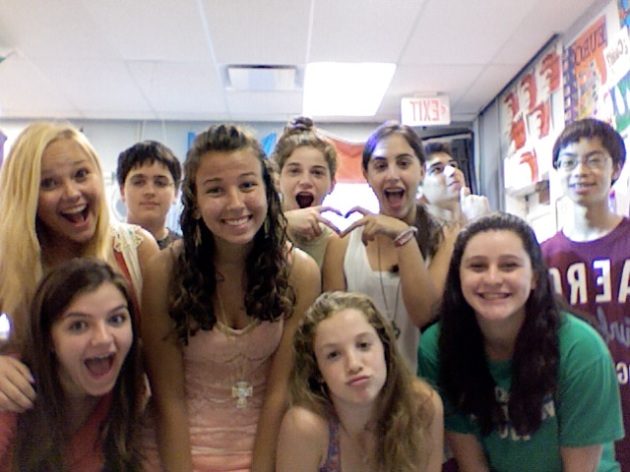 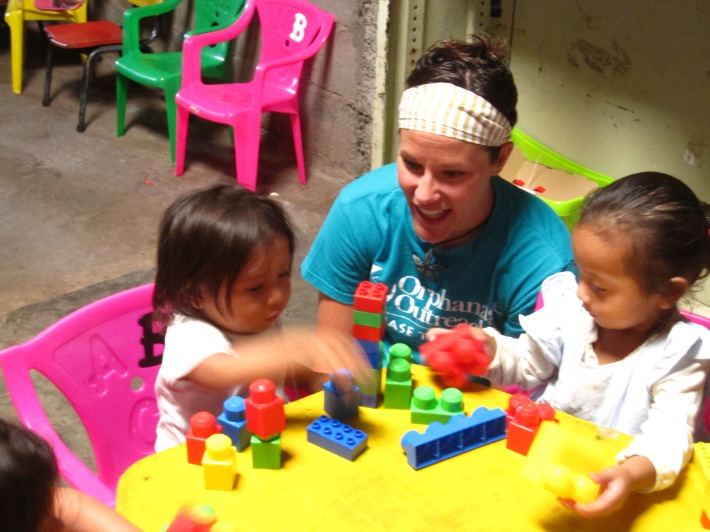 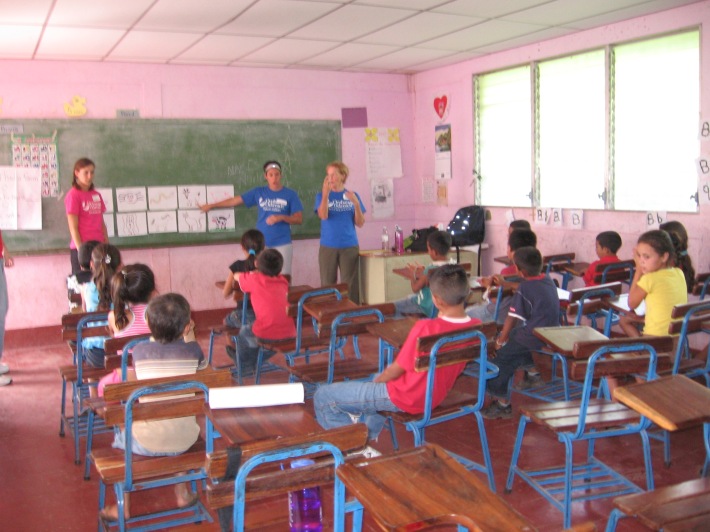 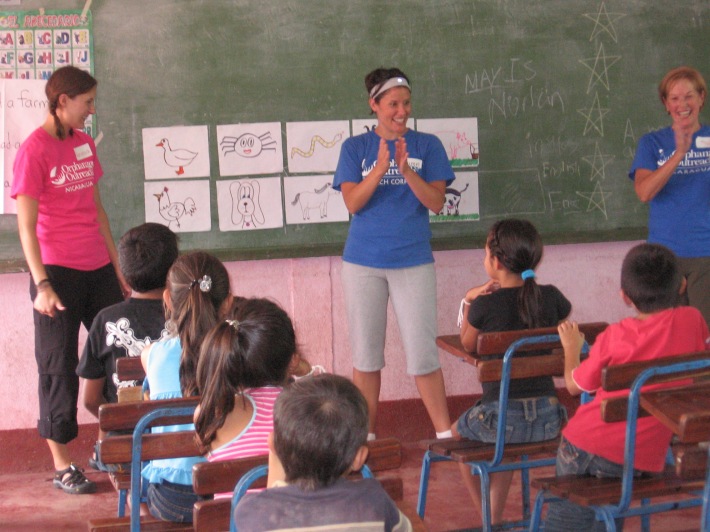 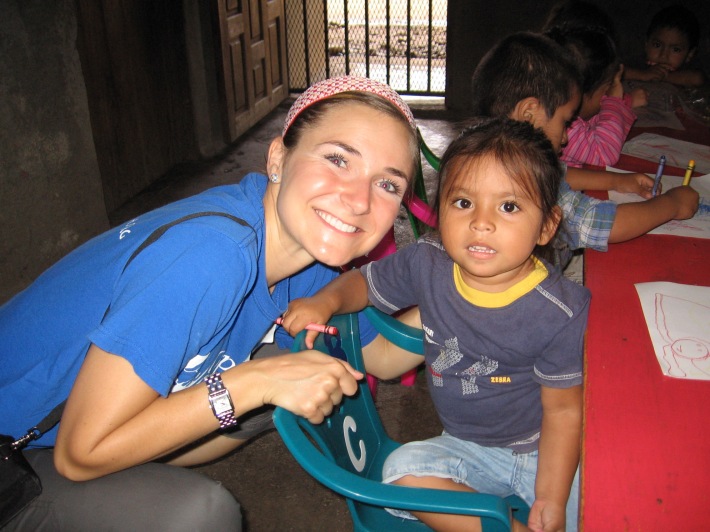 People. People important to you, people unimportant to you cross your life, touch it with love or carelessness and move on. There are people who leave you and you breathe a sigh of relief and wonder why you ever came into contact with them. There are people who leave you and you breathe a sigh of remorse and wonder why they had to go away and leave such a gaping hole. Children leave parents, parent leave friends. Acquaintances move on. Friends love and move on. You think of the many who have moved into your hazy memory. You look on those present and wonder. I believe this is all part of a master plan. People move in and out of our lives, and each leaves his mark on the other. You find you are made up of bits and pieces of all who ever touched your life, and you are more because of it, and you would be less if they had not touched you. So far this is who I know that I am... PS I am a Spanish teacher (lucky enough to teach grade K-8!) living in the Chicago area. I am a yoga alliance registered and certified yoga instructor. I am pursuing MBSR (Mindfulness Based Stress Reduction) certification and simply happy to be alive to write this and share with others. View all posts by bemindfulchange

4 thoughts on “All Children Speak the Same Language-Love”

All these posts, opinions, stories and reflections you find here are well-intentioned. I began this blog to share what was happening in my classroom with my students and now that I have my own blog through my school http://blogs.bannockburnschool.org/lbeversdorf ...I am truly I am just trying to share a snapshot of my mind at a certain point in time on a certain theme or topic, and maybe connect, share, collaborate or have a reader be able to empathize or feel what I was feeling or thinking. That's it.

So please feel free to agree or disagree, compliment or complain about any thing I write. That is what this blog is for. These are my opinions, stories and reflections and while I feel and think them right now they may change...that is what we humans do. We think, we reflect, we learn, we evolve.